As I made the promise of keeping my blog as real as possible I thought I'd let you get to know me better.
Over the past few years I have been fighting a on going battle with something I knew nothing about.
I thought I was alone - I thought I was just stranger than what I already am.
And it wasn't until it all got to much - my world started spinning out of control and I had no way of controlling it.
I had no idea what was really happening to me.
I've always been shy since I was young.
I was never outgoing - it just never appealed to me.
I was always the little girl who never really had any friends.
And i'm still the same girl now.
I keep myself to myself and I leave the outgoingness to everyone else.
I thought I was normal - whatever normal is.
And it wasn't until the anxiousness got out of control.
I had no control over my body what so ever.
I found it hard to breath - think.
The unpleasant thoughts were drowning my mind.
I cried.
A lot.
I needed help.
There was no way of controlling my breathing - I thought I was going to die.
There was no explanation as to why I was the way I was.
The worry got worse.
It made me sick.
I didn't know what was happening to me, or what caused it.
I got told I was having a panic attack - what the hell is a panic attack I thought?
What ever it was I didn't like; I just wanted it to stop.
Eventually it did after around twenty minutes.
Lucky my sister was with me - she suffers with them also.
She said I needed help; I made a doctors appointment.
But they still carried on; they got worse.
I started self harming - It seemed to help.
The pain it released - the need for release.
But I still got worse.
I got addicted, until I got help.
It was clear to them I was sick.
She got me help - the help I really needed.
I started counselling three weeks ago.
It helps.
I'm no longer alone.
I have someone to talk to - express my feeling.
Actually talk.
She didn't palm me off with pills - she listed.
I got diagnosed with severe anxiety and panic attacks.
But I was getting help.
I feel better - I get my feeling off my chest.
I get given tasks to complete - to get me to my goals.
It was clear to her was was wrong with me.
I never went out.
If I did it resulted in me either having a panic attack or anxious thoughts swarming my mind.
Thinking the worst was going to happen.
But it wasn't.
I'm not going to get better with the click of my fingers - it takes time - patience.
But i'm willing to be patient.
Everyone gets anxiety - some worse than others.
Some just worry about normal things like exams.
Others don't - they worry to a much severer extent.
I know I won't be cured - but i'm no longer alone.
There is someone out there to talk.
You will no longer be alone.
If you're dealing with the same feeling talk to someone.
It was the worst decision of my life not talking because it made me worse.
After the first time you talk it gets easier.
It doesn't have to be a doctor - parents, friends or family will listen.
Don't shut them away to build up.
Open up.
Chances are there are hundreds of other people going through the same thing.
You are NOT alone.

I have to be honest with you, I started this blog with goals and I did not succeed.
Goals that at the time seemed achievable, but they proved me wrong.
I started this blog to help me become more confident and write what I was truly feeling but that all fizzled out of control - I wasn't myself.
And I believe that was because I didn't write what I really wanted to write about. I was just another version of the bloggers I looked up to.
Beautiful, confident people - happy people.
And now I realise how naive I really was.
I want to be my own person, blog about what I love.
I realise now what I want to blog about.
Don't get me wrong, I still love writing about beauty and fashion but I never really wrote about what my life style was like - my hobbies if you will.
And that's what I want to do.
I want to write about the things I really love.
Take photography for instance - It's what i'm truly about.
I love how you can capture a thousand memories at the push of a button.
Memories I cherish wether that's with my family or friends.
My dream is to become a photographer; be responsible for the capture of other people memories that they too can cherish forever.
After all pictures speak a thousand words.
I want to write about my life - things I eat, places I travel, people who are the responsible for the smile on my face.
I really want to open up - I will open up.
The simplest things really do put the biggest smile on my face.
Wether that's a good book or a positive thought.
Books have become such a big part of my life - I get emotionally attached to the characters.
It takes me into a whole other world; somebody's world - a world where not everything and everyone is perfect.
A real world.
I have goals.
Goals that I will achieve through hard work and determination - I will achieve.
I will document my goals in this post so when I feel like giving up I can come here for moral support. 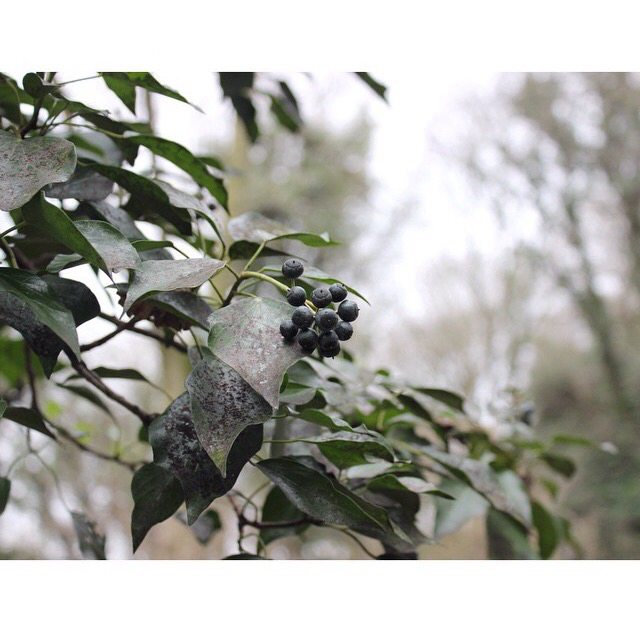 1. Carry my camera with me wherever I go - you never know when there is going be be a photo opportunity.

3. Display more pictures around my room.

4. Read more books - experiment with them, don't be afraid.

5. Cook more - wether it's for myself or family. It doesn't matter if it doesn't work out just try again!

6. Bake more - I love baking, but I just never do it enough.

7. Exercise every week! I was getting so good at exercising but then I stopped.

8. Tying in with the exercising is eating clean - doing exercise does nothing if you don't have the diet to match.

9. Buy more flowers - I love flowers but I'm never surrounded by them enough.

10. Film more videos! If you didn't know I have a YouTube channel and I love filming.

11. Write more blogposts - I made this promise before and didn't succeed but this time i'm determined!

13. Go for more walks - even if it's just up the road and back it gives me time to think.

14. Get out the house more - I need to start having more family days out.

15. And last but certainly not least - be more positive!


Hello everyone!
I would just like to wish you all a happy new year!
Todays not been the best year for me but it's had some good point.
But lets brush it off and look forward to 2015!
Happy New Year everyone!

Hello everyone!
So yet again i've uploaded another video to my channel.
It's a last minute christmas treats video, which consists of my mums mince pies and some little reindeer cakes (which failed).
I hope you enjoy the video, please give it a thumbs up and maybe even subscribe!
Thank you! 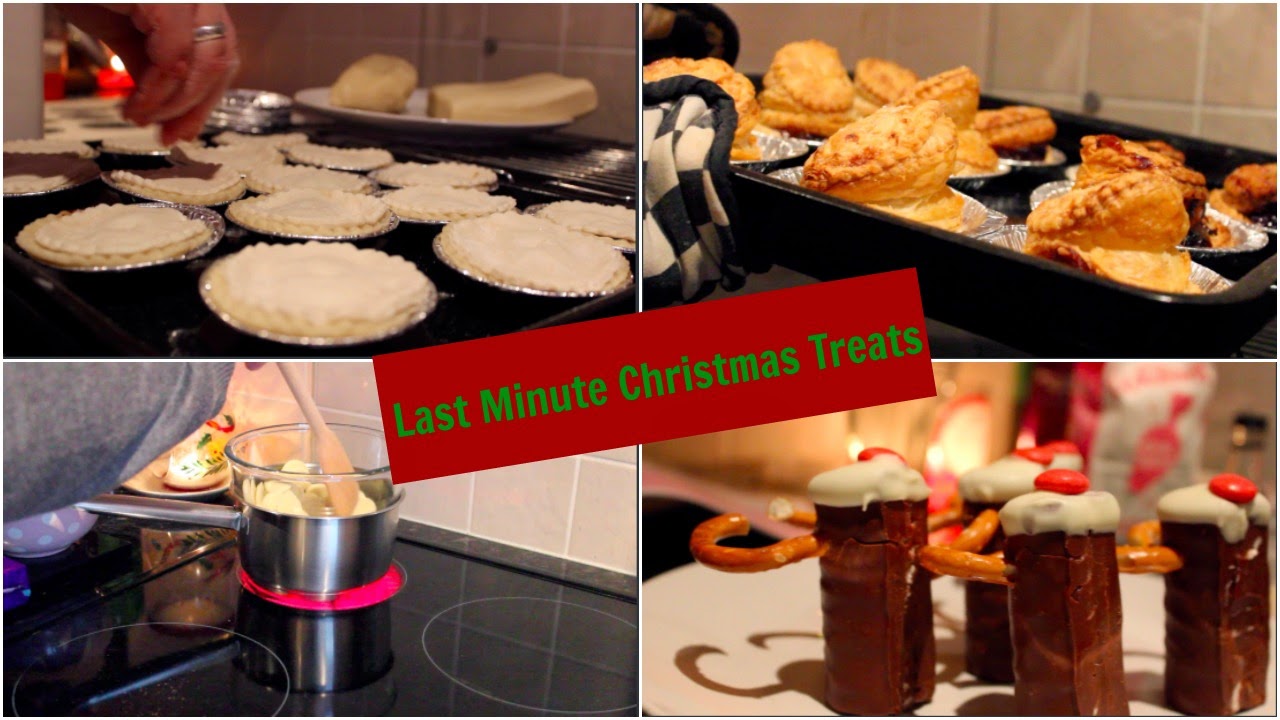 Getting Ready For Christmas!

Hello everyone!
So you know I said I was uploading another video?
Well I've uploaded it - it's here!
It is a really short video but there will be many more to come.
Anyways I just wanted to let you know its here!
Please check it out and maybe even like,comment and subscribe if you're feeling nice! 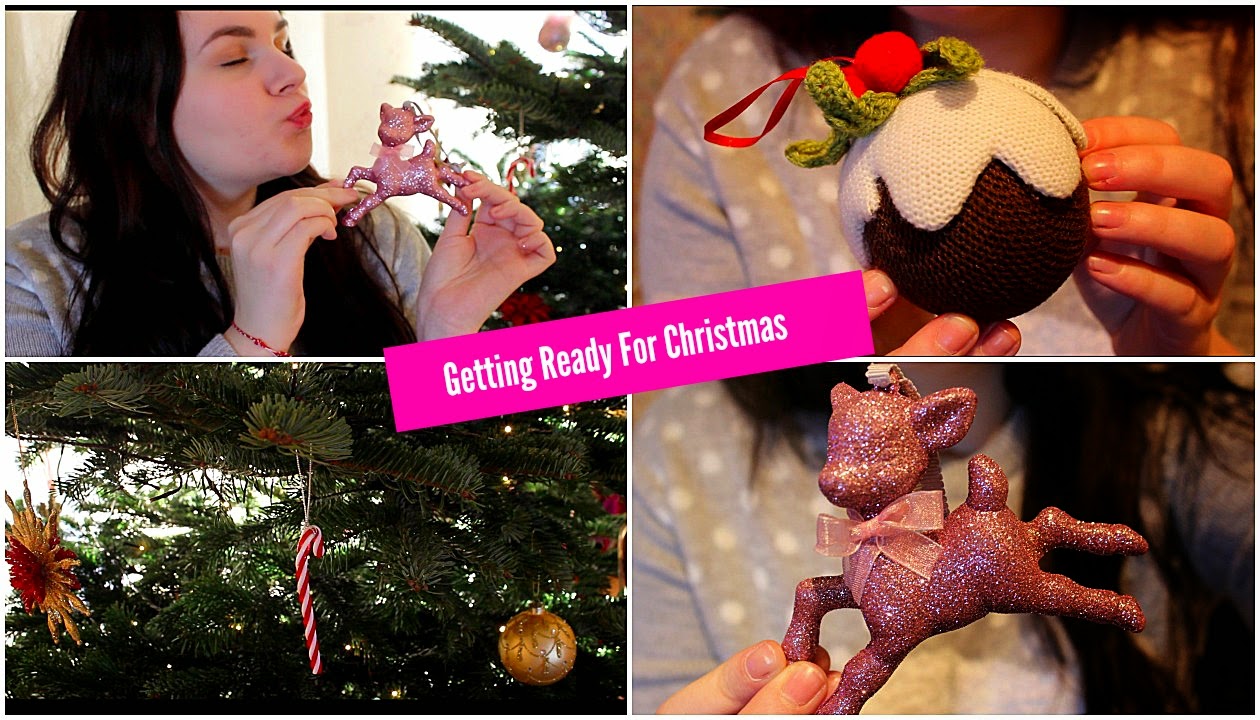 Watch my new video here! - https://www.youtube.com/watch?v=9pwWy7SpIbI&list=UUdvPu9z59F5uXb1P2WyVqqQ
Posted by Chloe ♡ at 04:20 No comments:

So some of you may know that I have a YouTube channel, well I filmed a video back in August and I loved doing it! Recently I decided I wanted to make another and maybe even start my channel properly. I invested in a Macbook Air this week for school, as i'm in year 10 I have a lot of course work and revision to do, so I basically needed a laptop for myself. I've always wanted a MacBook so I thought i'd just invest in one now. I've now got iMovie which means my videos will be a lot better quality and I can upload more frequently. 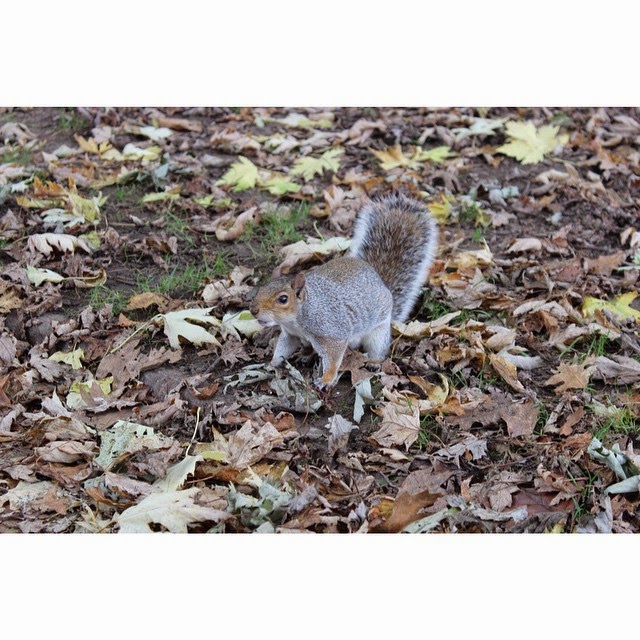 So basically i'm going to start my YouTube properly!
If you would please check it out, and maybe subscribe that would be really nice!
I'll be uploading most Sundays!

https://www.youtube.com/user/ChloeHarbxo
Posted by Chloe ♡ at 05:38 No comments:


So if you didn't know already I met Zoë on the 27th of November.
Honestly it was the best day of my life!
I've watched Zoë since I was eleven and now I'm nearly fifteen so you can do the maths. I actually found all the other YouTubers through her which I'm also very grateful for. 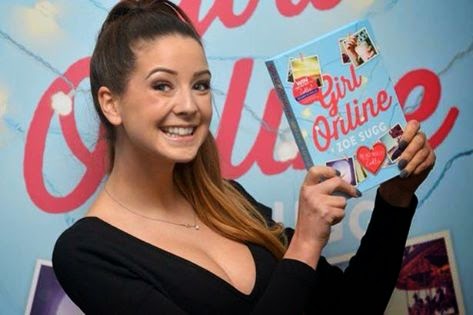 *This is not my photo*

The book signing was in Manchester which is around a two hours away from where I live so it wasn't much of a hassle to get there.
We did leave early ish so that we'd be near the front of the queue - turns out we where first in the queue!
We arrived around one o'clock and no one was at the venue, which was a bonus. 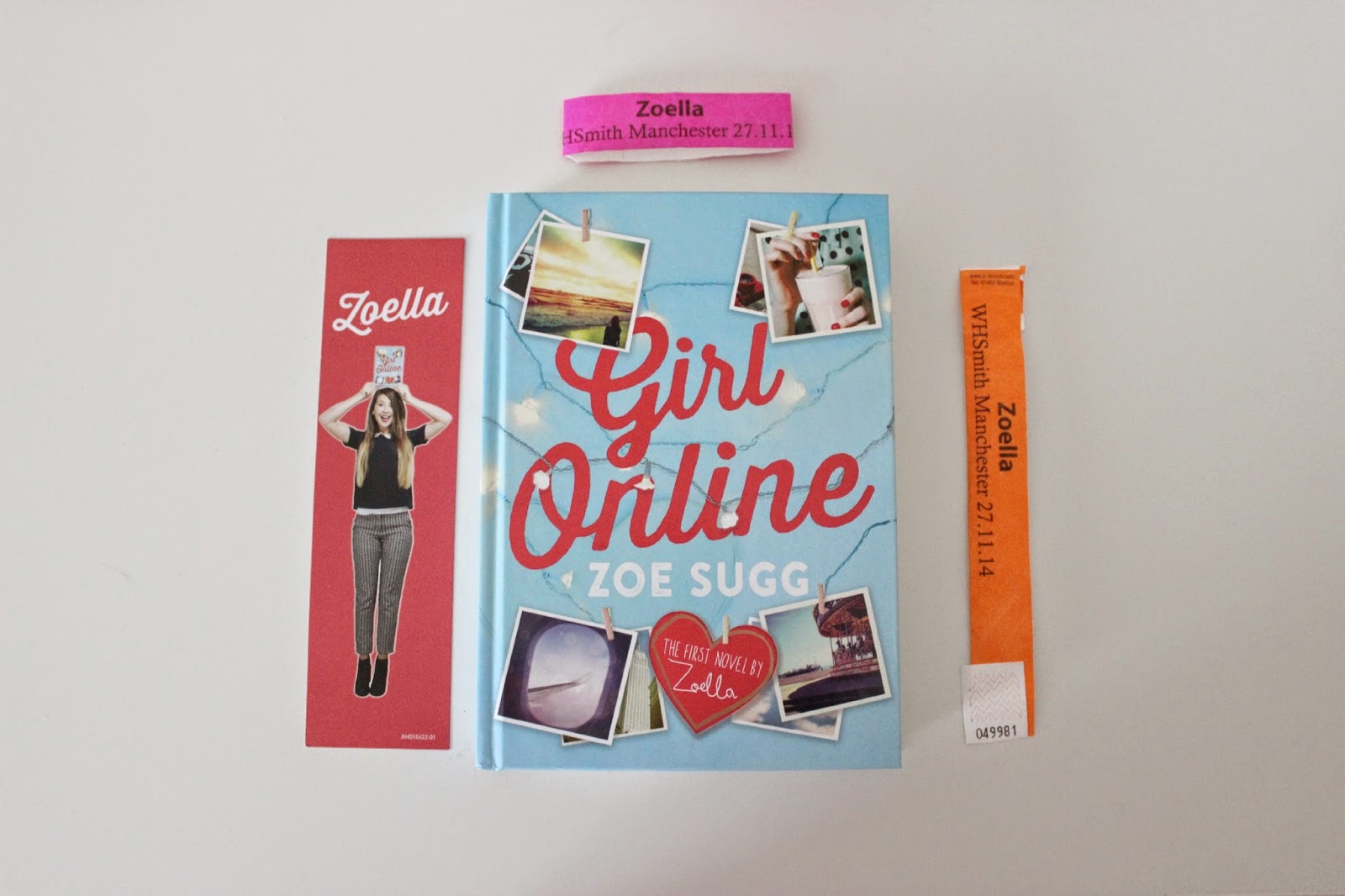 As the day grew later and more and more people started to arrive, a lady came and spoke to us all telling us that it wasn't long now.
The next thing I know is she's letting us all in.
The venue was really nicely decorated and everywhere I turned there was something about 'Girl Online' which personally I loved!
We each got given wrist bands and a copy of the book. 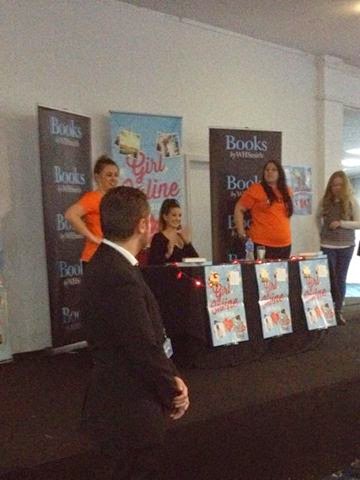 *Zoë waving at us*

When we finally got around the maze of barriers we arrived to be greeted by a security guard. You may recognise him if you watched Alfie's vlog!
The security where so lovely to us (we had to explain who Zoë was).


Then one of the Penguin ladies came up to the security asking for the first twenty people.
We got taken to the front and she explained to us what was going to happen.
The photographer was going to take photos of Zoë.
Then the signing began!


Zoë was so lovely, she's just as beautiful in person.

This was our conversation! 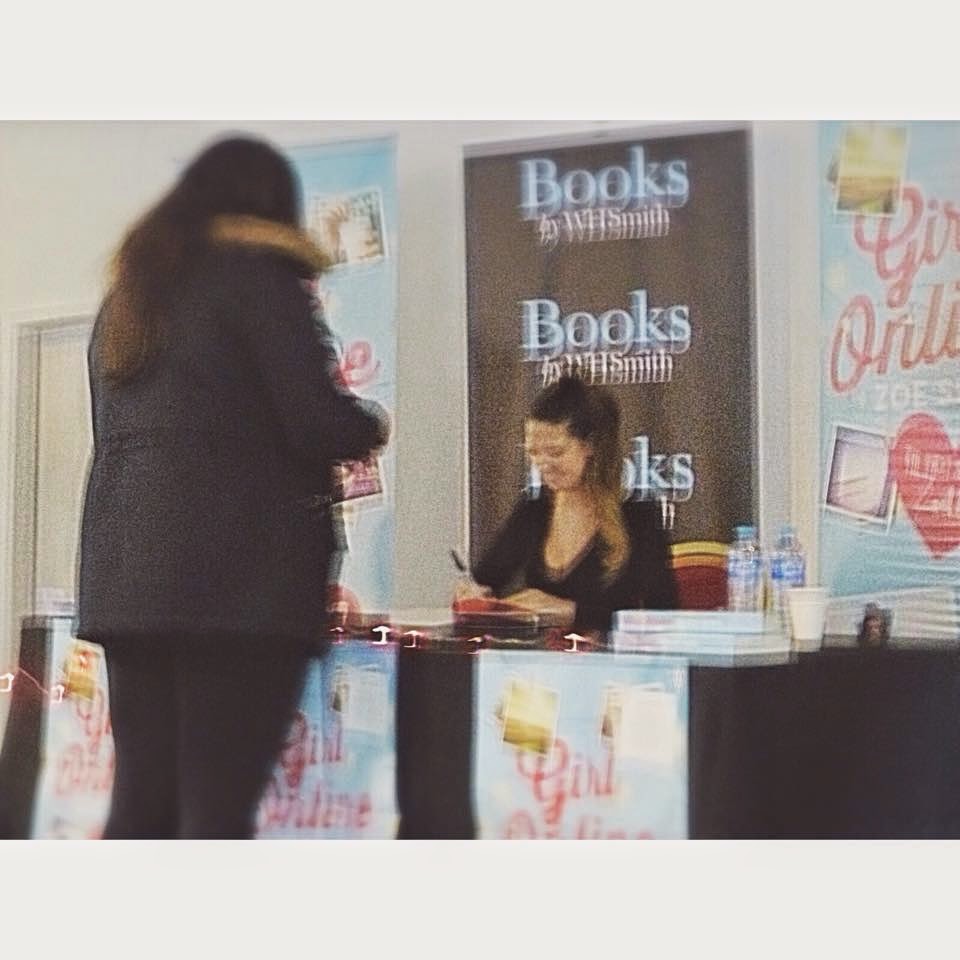 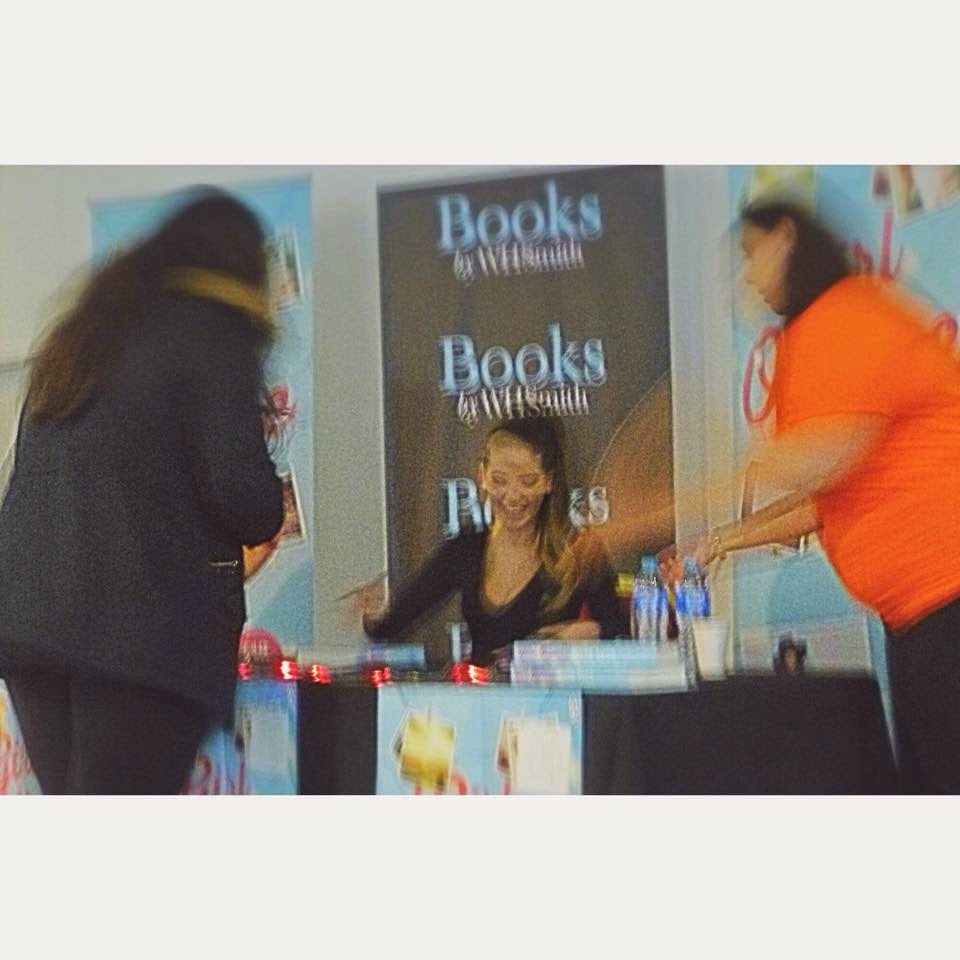 *The camera went funny because of the lighting*

Zoë was just so genuine and sweet.

On the way out we got given the poster and I just couldn't hold back the tears - I was so happy!
She did see me crying and she said 'Awh' 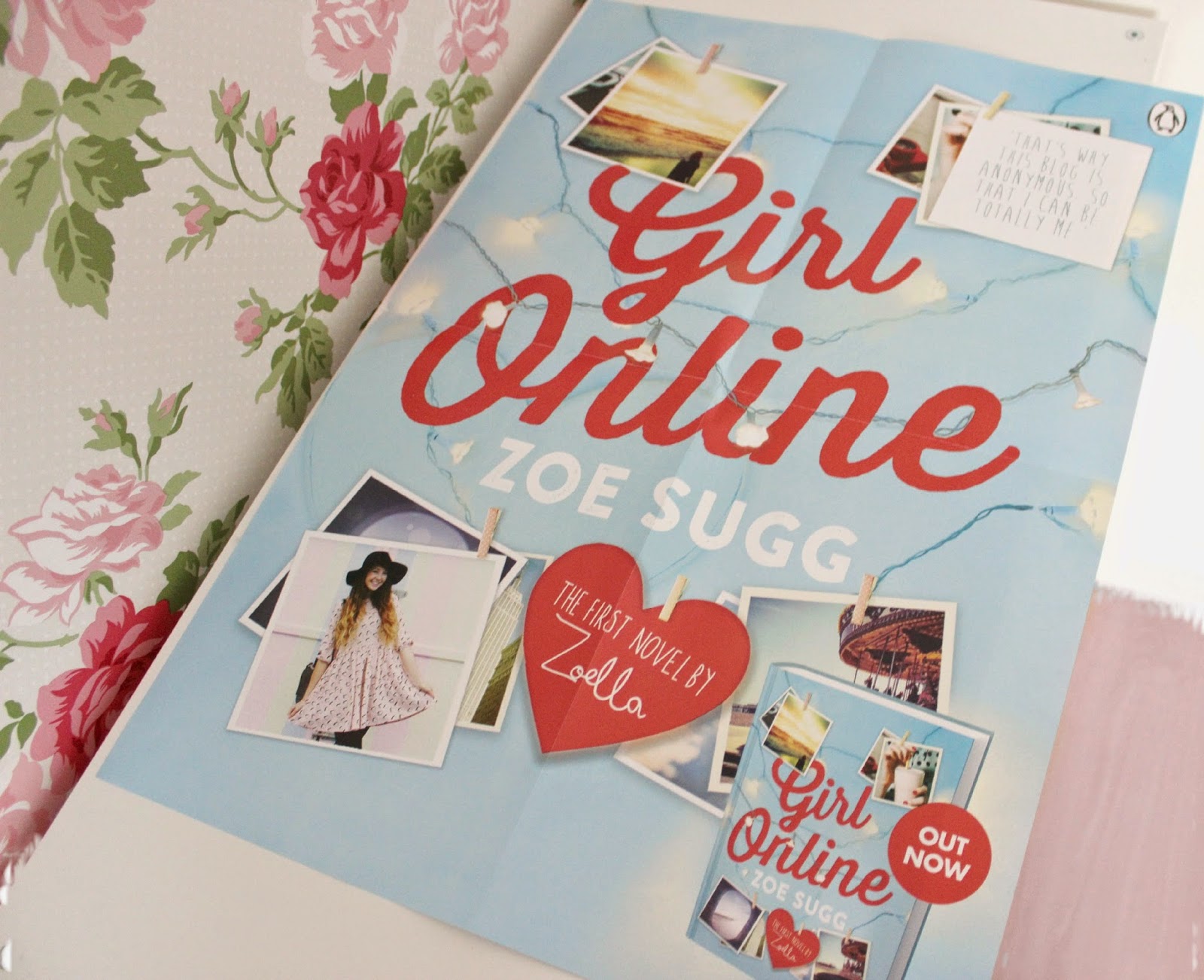 *Poster we got given*

On our way out there was a lot more people then I thought there was going to be, I'd say around five hundred!

But honestly it was the best day of my life, I feel so blessed to have met my sunshine. 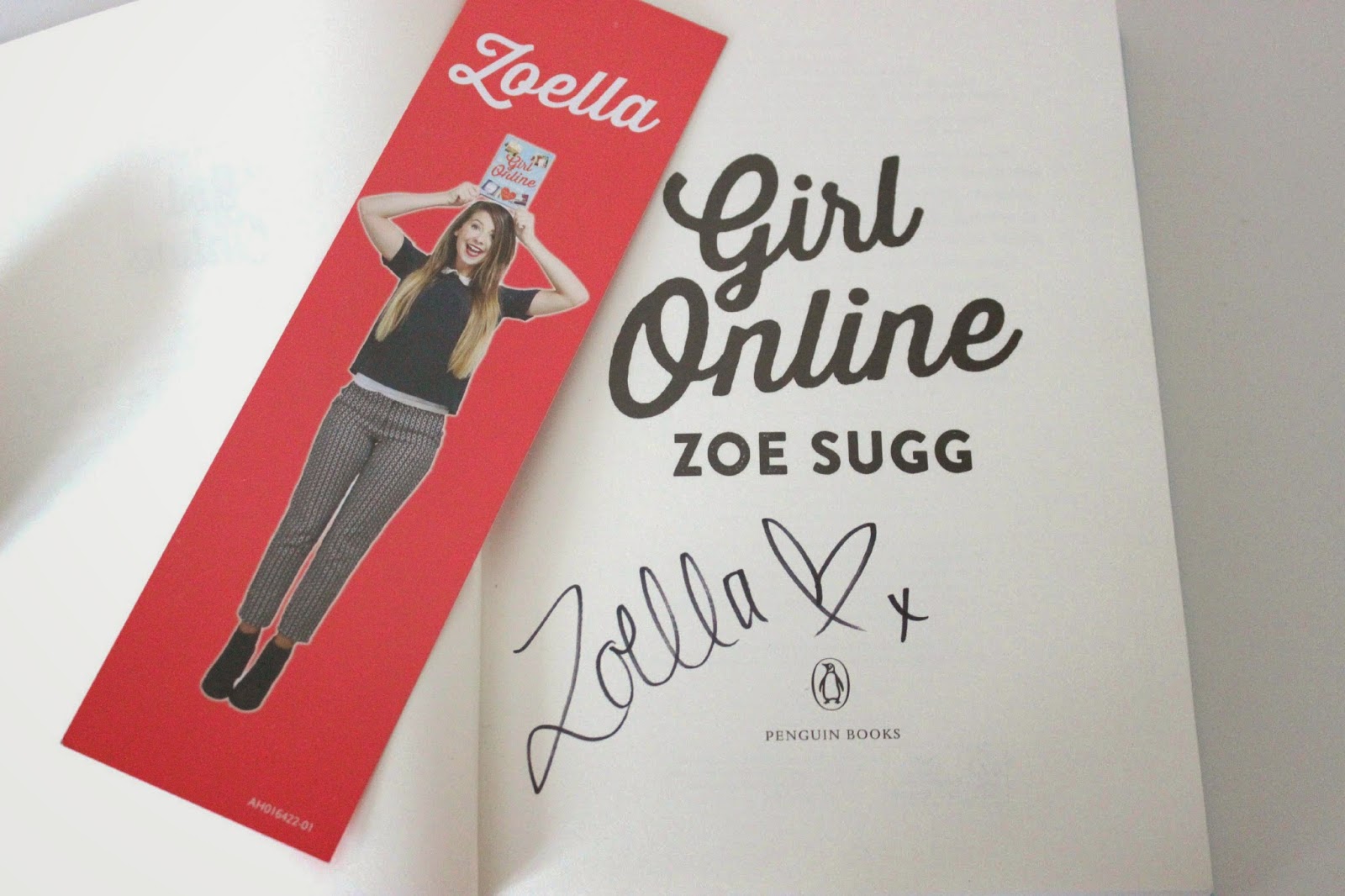 You can purchase a copy of 'Girl Online' here 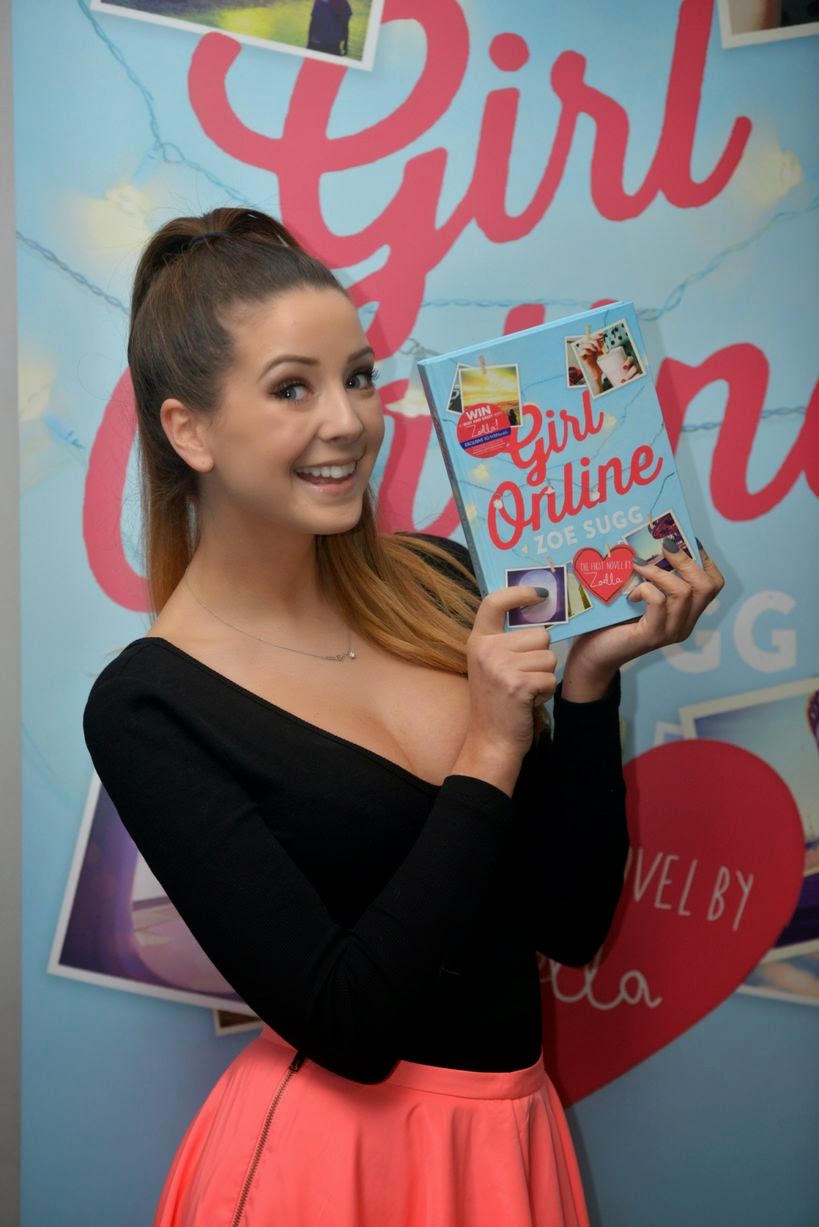 *Again this isn't my photo*


Thank you so much for reading!